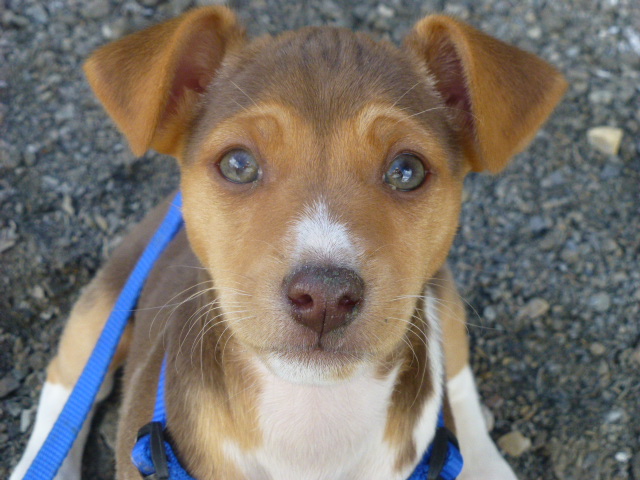 Last Sunday, the couple that are buying Holly for her parents and grandma came out to meet her and visit with her. She did awesome! I took them over to the other house as it is empty right now. That way they would be away from the other dogs and could be just with Holly. At first she was a bit standoffish and didn’t really want them petting her, but she quickly overcame her hesitancy and when the gentleman sat on the couch, she ran over and tried to climb up beside him and their young son. They brought Cricket (Josie from last year’s Decker line litter) with them and she met Holly. They weren’t too sure of each other, and Cricket was pretty wound up because she recognized her birth home and wanted to play with her brother Colt and sister Maddie. Holly was in a house she hadn’t been in before and had no clue who these people were. So they didn’t know quite what to do. I think once they are in Cricket’s home and she’s not excited about being here they will establish a good relationship. At the end of the visit, Holly had fallen asleep in the gentleman’s arms. What a sweetie! Needless to say, they love her and can’t wait to take her home!

I took her over to the Rehabilitation and Senior Center again yesterday, but as I was running late due to working later than I had expected, I wasn’t able to do as much with her. She’s not really crazy about them trying to pet her, but she does well. Like so many people, they always reach over her head instead of under her chin, which makes her a bit leery. But she settles down once they pet her. I give her treats and tell her she’s a good girl when I can, and encourage the residents to give her a treat if they are physically able. I will hopefully take her again next week. Not sure about the week after, but at least she’s getting some exposure.

Ok, I’m sure I broke some kind of land speed record today walking little Holly with the big guys in the ‘dobies. Well, maybe a snail’s land speed record. Little Holly was most content sitting or standing and looking around. She isn’t used to the harness that I bought her just yet, but she did pretty well considering. She only grabbed at the leash a few times but didn’t make a habit of it, thankfully!

But I will have to admit, there must be tons of new smells for a young pup to take in and separate, and the other dogs were racing around, some chasing prairie dogs and others climbing up the steep hills that surround the small valley area where I took them today. She checked out a few prairie dog holes and was pretty fascinated by the arroyo cutting through the ‘dobies. None of them are particularly deep, but they must have seemed like it to a young pup.

At one point I walked her along inside of one of the arroyos. She wanted to climb up the banks like the big kids, but couldn’t quite make it.

There was a storm threatening to move in over the valley, so it got pretty windy towards the last of our walk. I finally got her to stay under my sweatshirt so I could keep her out of the wind. She wanted to put her head out the neck, which made it a bit tight, but she stayed there after I gave her some goodies I brought along with me. We were out for quite awhile, so she was getting pretty tired. And as you can tell, maybe, from the pictures, the terrain isn’t exactly flat and level!