It has been a bit on the cold side the last few days, now that winter has officially arrived here on the western slope of Colorado. I noticed that my one little bantam hen, who I have now decided to call HenReeEtta, wasn’t handling the cold so well this time around and had thought to bring her in. (For whatever reason, she has not grown in her feathers except for her breast and shoulder area and around her neck and her head for the most part, no matter what I have tried!) As the day kinda got away from me, I didn’t think to bring her in and honestly didn’t think much of it, as I’ve had other half naked chickens survive the cold in previous years. But when I went in to go feed, luckily a bit earlier than usual, I found the poor little girl laying towards the wall. Just by the way she looked, I knew she was in trouble. So I picked her up and carried her into the house. I’m sure she thought she had died and was headed for hell as I tried to bring some heat back into her cold little body over the propane heater flames. I rubbed her and rubbed her, doing whatever I could to get the blood flowing again. I was a bit concerned that it was too late, as her eyes were closed and her comb was turning dark.

I had to go out and finish up the chores, so I set her in a wire crate beside an electric heater and headed outside. I honestly didn’t give much thought to the dogs, as she was safe in the wire crate and I really didn’t think they would go after her anyway. A bit later, I came back into the house with some hay to put on the crate floor so that the little hen would have something a bit more comfy to lay on than the wire floor. She was pretty much just laying over on her chest, and her toes were getting a bit stuck under the wire. To my surprise, my EmmaLee was guarding the little hen from the other Ratties when they came up to check her out and to see what I was doing. Next thing I know, she is half way in the crate. Even tho’ it is just a bit too small for her to fit comfortably, she went in and sat down with the bird and tried to get comfortable, although she didn’t really cuddle with the bird. Probably too many pokey things, as her wing feathers have never fully finished growing out. But she was really wanting to do something with the bird, just didn’t know for sure what.

(Here is a short video I attempted to take. It is a bit dark, but you can see EmmaLee trying to help the little bantam out.)

So while I rubbed life back into her little tiny body, EmmaLee provided moral support and some warmth, even laying down as best she could to keep her company. I finally thought the girl was doing well enough, so I propped her up on EmmaLee and left the two together for awhile. Neither moved much, but I could tell that HenReeEtta was gaining some strength and perking up a bit. There for a bit, it was really touch and go, and I didn’t think she was going to make it. But she seems to be ok for the most part now, as when EmmaLee wanted to go back in the crate after a very short break, HenReeEtta pecked her! So I told EmmaLee that she was a very good girl and I was very proud of her, but encouraged her to sit outside the crate instead of in with the bird.

What was also interesting is the reaction of the other dogs. Colt was getting as close as he could, as was my English Shepherd, Tucker. Tucker EmmaLee allowed, as she has a close relationship with him and knows that he wouldn’t hurt the little hen. Colt she wasn’t too crazy about him getting too close, nor Sammie or Chance. Joy and Maddie stayed pretty much away from her from what I saw. 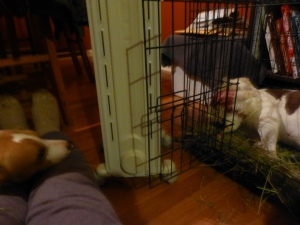 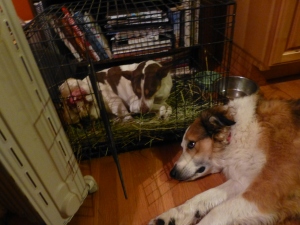 UPDATE ON THE LITTLE HEN: HenReeEtta is doing fine and is eating, drinking and is alert and moving around. She’ll be in the house a few more days, than I will move her back out to the chicken coop and leave a heat lamp on for her. Might have to get some chicks or something to keep her company!